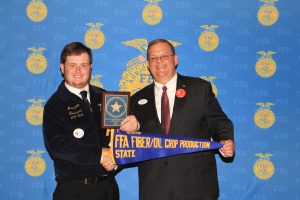 Scott, the son of Jesse Sr. and Tammy Scott, began working on his supervised agricultural experience (SAE) in 2014. He said his greatest challenge while working on his SAE was learning to set up and operate the four-row KMC peanut inverter.

“The hardest part is setting the correct plow depth,” Scott said. “If I set it too shallow, peanuts are plowed off and left in the ground at harvest. It it’s set too deep, it leaves too much dirt on the vines, making it hard for the peanuts to dry.”

Scott said his dad was instrumental in helping him overcome the challenge by adjusting plow point depth in several fields over a long period of time.

However, Scott has mastered much of the daily farm tasks. From operating a disc harrow to prepare fields for planting, to operating combines and peanut inverters used at harvest, Scott said his confidence and skill levels have grown, along with his responsibilities.

“I can do pretty much everything on the farm,” said Scott who credits his father for motivating him to work on the farm.

The Alabama Peanut Producers Association has been representing the interests of peanut growers through promotions, research and education programs since 1958.

FFA is a dynamic youth organization that changes lives and prepares members for premier leadership, personal growth and career success through agricultural education.