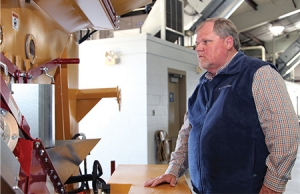 Dale County peanut and cotton farmer Chris Thompson said the trade show is an opportunity to connect with other farmers and gain information to help him on his farm.

“It’s great to look at new equipment, talk with other producers about farm policy and what FSA and USDA are trying to implement this winter,” Thompson said. “Any time you get the opportunity to learn more about what you do, it’s good to take advantage of it.”

Butler County farmer Steve Tanner won a $5,000 discount towards an Amadus combine or picker/inverter. He said he saw a product at the meeting that could help with nematode management on his farm.

“Neem Oil is supposed to fight nematodes, and they’ve done some research in Georgia with it,” Tanner said. “A lot of people have used it over there and believe in it. It’s something the deer won’t eat, so in the areas I’m having deer trouble, I can use this to control that, too.”

Before lunch, the Alabama Peanut Producers Association (APPA), a division of the Alabama Farmers Federation, met to elect new members to its board of directors and appoint members to PeanutPAC.

The Florida and Alabama peanut producers associations honored former Auburn University professor Joe Touchton, who was head of the university’s Crop, Soil and Environmental Sciences Department, for his years of service to peanut farmers.