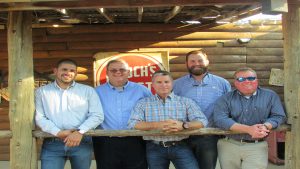 The class began the session at the farm of Gary Jackson, who grows peanuts, cotton, corn, peppers, and rosemary. He explained that he tries to grow a diverse set of crops as a way to maximize profitability and hedge against potential losses from any one particular crop.

After meeting with Jackson, the class stopped at Birdsong’s peanut shelling facility. For many of the leaders, it was their first time seeing how peanuts are shelled, sorted and stored. Several said that it gave them a better understanding of how peanuts move from field to market.

The next day, the class went through a media training course presented by a communications professor at Texas Tech University and a reporter from a local television station. The training was an invaluable course in learning how to talk to the media as a voice for all farmers. The class ended with a tour of a cotton field and composting facility that repurposes byproduct from cotton gins.