The announcement by the U.S. Department of Agriculture (USDA) to revise the minimum quality and handling standards for domestic and imported peanuts marketed in the U.S. is good news for Alabama peanut farmers. 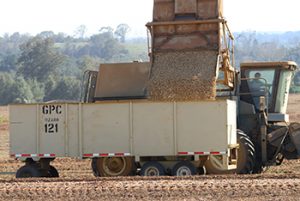 The new grading standards will not affect the quality of peanuts being delivered to the market. However, farmers will benefit from higher use of some peanuts in domestic edible food products.

USDA Agricultural Marketing Service recently announced the final rule (7 CFR Part 996) published in the Federal Register. The rule implements a recommendation from the Peanut Standards Board to raise the grading score used to classify farmer stock peanuts as Segregation 2 from 2.49 percent to 3.49 percent.

The final rule becomes effective Feb. 1, 2018 and will benefit American peanut farmers who have been affected by having their crop graded as Segregation 2. Segregation 2 peanuts typically are those with lower quality or damaged kernels. This adjustment to the grading score will not affect the quality of peanuts being delivered to the market.

“Updating peanut standards and raising the grading score could benefit a lot of farmers,” said Alabama Peanut Producers (APPA) Executive Director Caleb Bristow. “Peanuts graded as Segregation 2 can create great financial losses for farmers. However, the true value seems to be significantly higher. This change will reduce the burden on peanut growers.”

The Peanut Standards Board, authorized under the 2002 U.S. Farm Bill, consists of 18 members who represent peanut-growing regions of the U.S. The United States Department of Agriculture consults with the board to establish or change quality and handling standards for domestically produced and imported peanuts.

From a nationwide perspective, Segregation 2 peanuts usually constitute less than 1 percent of the entire U.S. crop. Peanut growers, however, have experienced some very challenging weather conditions in recent years, especially with rain at harvest time, which has increased the percentage of peanuts being graded as Segregation 2s.