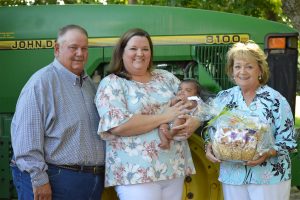 Houston County farmer Fred Helms has been growing peanuts 43 years. He said nothing is more important than growing a safe, delicious, nutritious product people enjoy. That’s why he and other farmers support research to address food allergies.

“America’s peanut farmers, through the National Peanut Board (NPB), have contributed more than $25.3 million for food allergy research, education and outreach since 2001,” said Helms, an Alabama Peanut Producer Association board member. “Research has proven when peanuts are introduced to infants early, they’re less likely to develop a peanut allergy.”

For Helms, the research has special meaning since his daughter and son-in-law, Dusty and Charles McKinley, recently welcomed a new baby boy to the family.

To celebrate Helms’ new grandson, and to promote early introduction of peanuts, McKinley and her son received a basket of early-introduction peanut products, including a “4 to 6 months” onesie. National Peanut Board Ambassador George Jeffcoat, a Houston County peanut farmer, and Mary Helms of the Houston County Farmers Federation Women’s Leadership Committee, made the presentation.

The study, Learning Early About Peanut Allergies (LEAP), was released in 2015 and was so significant it led to new guidelines established by the National Institutes of Allergies and Infectious Disease (NIAID).

The American College of Allergy, Asthma and Immunology, along with the Food Allergy & Anaphylaxis Connection Team and other medical and allergy groups, have endorsed those guidelines.

Introducing peanut foods to infants can be safe and easy, according to the NPB. Peanut butter is easily thinned with breast milk, formula or water. It can be added to previously tolerated foods, and powdered peanut butter can be mixed into rice cereal or applesauce. Babies can teethe on peanut puffs, and older infants can eat homemade peanut butter teething biscuits.

Visit PreventPeanutAllergies.com to find out about your child’s risk and discover more about helping to prevent a potential peanut allergy.

The NPB released a limited-edition baby clothing line to emphasize the window of opportunity to introduce peanut products to infants. “Size 4 to 6 Months” links how parents shop for a child’s clothing during a specific time period with this crucial time for introducing peanut foods.

Check out this clothing line at PreventPeanutAllergies.com until June 1.