“I’m thrilled to be a part of the groundbreaking for Coastal Growers, which will be a first-class peanut production facility,” Gov. Ivey said. “Coastal Growers is proving that Alabama’s economy remains strong and is bouncing back from what has been a hard year. This partnership is a win-win for Atmore, the surrounding communities and the state of Alabama.” 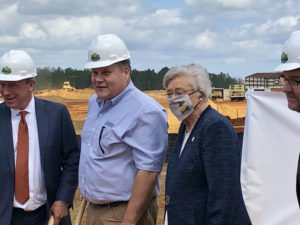 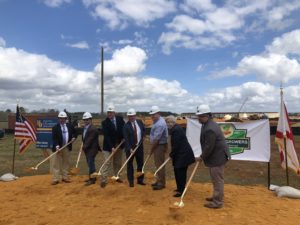 ATMORE, ALA. – Coastal Growers LLC plans to build an $87 million peanut shelling and storage plant in Atmore, AL. The plant, targeted to open up in December of 2021, will bring at least 100 jobs to the area with more temporary workers being needed during peak shelling times.

The idea of the cooperative shelling plant for Southwest Alabama began two years ago when several grower leaders approached a group of buying points from east and west Alabama and made it clear that this is something they wanted to pursue. The “why” behind the company was very simple, growers want to maximize farm profits.

“With commodity prices at such depressing levels, we as growers have been open to consider anything that might give us a better opportunity to financially survive,” says Joe Parker, owner and general manager of Summerdale Peanut in Baldwin County and a member of Coastal Growers.

The cooperative shelling plant model gives growers the opportunity to collectively sell on the shelled goods market rather than the traditional farmers stock market.

“This, our investors believe, will give them the best chance to enhance earnings and have a sustainable family farm,” Parker says. “Independent buying points go where their customers want to go in order to not lose tonnage. Therefore, this is a win-win for the growers and the buying points.”

The company was able to receive over $20 million in grants and incentives through Federal, State and local governments.  In addition, the US Secretary of Agriculture, Sonny Perdue, recently approved a USDA loan guarantee for a substantial part of the project funding. Economic Development agencies from the State of Alabama and Escambia County, Alabama, also provided support.

Baldwin County farmer Mark Kaiser said the new plant will allow local farmers to capture more of the profit off of their crops by becoming vertically integrated.

“This facility will be owned by the farmers who use it, and they’ll keep those profits themselves,” says Kaiser who serves as the Alabama Peanut Producers Association vice president. “That’s good for both the farmers and for the immediate area, because the money will just keep turning over locally.”

Directed by a board, Coastal Growers is owned by a cooperative of 90 farm families and will work with 6 buying points. Most of the farmers reside in Alabama but there are members from the Mississippi River to the Chattahoochee River. The company is still accepting new members, however will be limiting it soon due to capacity constraints.