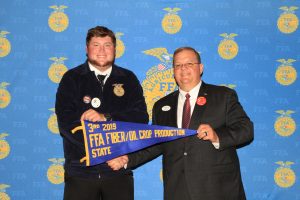 Adkins, the son of Jennifer and Jason Adkins, began working on his supervised agricultural experience (SAE) in 2016. Adkins enjoys the different roles and tasks he gets to be involved in on a diversified row crop farm.

He said his greatest challenge while working on his SAE has been learning to deal with Mother Nature, especially after Hurricane Michael in October 2018.

“The afternoon Michael came through a strong wind gust swooped under our barn and lifted it up and threw pieces of it everywhere,” Adkins said. “When the barn blew away, one of the iron beams landed on the hood of the tractor that we were using to dig peanuts.”

Adkins said they couldn’t get in the field for days after the rains, and it was just a constant battle. “Some fields were unable to be picked,” he said.

One of Adkins’ greatest accomplishments in his SAE was learning to properly apply chemicals to the crops. “There is a lot more to running a sprayer than just pulling in the field and turning your booms on,” Adkins said. “I had to learn how to correctly mix tanks with the correct amount of chemicals and water. I learned that some chemicals cannot be applied twice in the same application. Another important task was to clean out the tank on the sprayer to prevent cross spraying.”

Adkins credits being involved in his SAE for helping him develop a strong work ethic. “The one thing that is constant in being successful in any agricultural career is developing a strong work ethic,” Adkins said. “Because of the ever-changing conditions that the agriculture industry faces, working not by the clock, but until the job is done has given me insight into what it takes to be successful and being able to complete tasks in a timely manner to produce a higher quality product.”

The Alabama Peanut Producers Association has been representing the interests of peanut growers through promotions, research and education programs since 1958.

FFA is a dynamic youth organization that changes lives and prepares members for premier leadership, personal growth and career success through agricultural education.