The FDA has acknowledged an approved qualified health claim to support the consumption of peanut foods to reduce the risk of peanut allergies in infants. The new 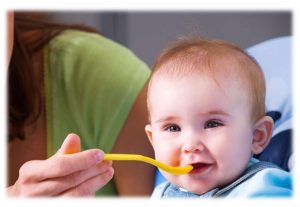 claim can now be used by manufacturers who market foods for infants that contain peanut protein. Here’s the full claim:

For most infants with severe eczema and/or egg allergy who are already eating solid foods, introducing foods containing ground peanuts between 4 and 10 months of age and continuing consumption may reduce the risk of developing peanut allergy by 5 years of age. FDA has determined, however, that the evidence supporting this claim is limited to one study.

If your infant has severe eczema and/or egg allergy, check with your infant’s healthcare provider before feeding foods containing ground peanuts.

Based on the Learning Early About Peanut Allergies (LEAP) study, the National Institute of Allergy and Infectious Diseases (NIAID) released guidelines in January for clinicians and caregivers to encourage the introduction of peanut foods to prevent peanut allergies. According to the guidelines, introduction should vary based on risk with those at highest risk (those with severe eczema and/or egg allergy) starting peanut foods as early as 4-6 months after an evaluation by their pediatrician or allergist, all other infants can begin to eat peanut foods at around 6 months. However, there aren’t many peanut-containing foods in the U.S. that have been developed specifically for infants.

Because peanuts and thick peanut butter can be a choking hazard, those aren’t appropriate for feeding to babies and must be modified. Parents can make a safe mixture themselves by mixing two teaspoons of peanut butter or powdered peanut butter with two tablespoons or more of pureed fruit, yogurt (if they’re already eating this), formula or breastmilk, or prepared infant cereal. Some parents, however, may prefer a convenience item like the peanut puff parents feed infants in Israel. In addition, a high percentage of parents are anxious about early introduction of peanut foods. This new qualified health claim could help manufacturers create and market infant-specific products to help make introducing peanut foods to infants easier for parents.

For more on how to introduce peanut foods to infants, visit PeanutAllergyFacts.org