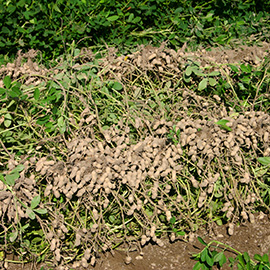 Research suggests that peanut producers could have some flexibility in seeding rates, thereby reducing their overall costs.

producers, especially for larger-seeded cultivars such as Georgia-06. One option for saving money is to reduce seeding rates, but can this be done without negatively impacting yields?

In trials conducted at the Wiregrass Research and Extension Center in 2014, 2015 and 2016, researchers looked at the impact of seeding rates of three, four, six, and eight seeds per row foot as influenced by planting date on the incidence of tomato spotted wilt virus, or TSW, and white mold, leaf spot defoliation and yield of commercial peanut varieties Georgia-06G, Georgia-09B, and Georgia-12Y in a dryland production system.

Georgia-06G, Georgia-09B and Georgia-12Y had similar yields, except in the latter variety in 2016, when a sharp yield decline was noted at the second date of planting. No yield gains were seen by increasing seeding rates. The lack of a variety and seeding rate interaction showed that the absence of a seeding rate response was consistent across all varieties.

In a previous Alabama study, seeding rate had a limited impact on the yield of commercial peanut varieties in an irrigated production system. Year (i.e., rainfall) had a sizable impact on yield. With good rainfall through much of September, yields averaged 5,660 pounds per acre in 2016, as compared with drier late-summer and early-fall weather patterns in 2014 and 2015, when the mean yield was 2,454 pounds per acre and 3,217, respectively.

Despite low pressure for tomato spotted wilt, leaf spot and white mold, planting date, variety and seeding rate alone or in combination significantly impacted disease activity. While TSW incidence was often similar across planting dates and varieties, in 2016, greater disease was seen in the April-planted Georgia-09B than in the May planting.

Previously, incidence of this disease was also greater in April- than May-planted peanuts. Elevated TSW levels recorded at the lowest seeding rate is also consistent with the results of previous studies. Leaf spot defoliation—which was greater in two of three years in the May- versus April-planted Georgia-06G, Georgia-09B and Georgia-12Y—also intensified slightly but significantly with increasing seeding rates in the May- but not the April-planted peanuts.

Results of this and a previous Alabama study suggest that growers have some flexibility with seeding rates in dryland and irrigated production settings. Even under drier conditions in 2014 and 2015, yield was similar across all seeding rates for all three peanut varieties. None of the varieties screened showed a significant yield advantage, despite differences in disease damage.

The full report can be found here.

The funding for this project is made possible by checkoff dollars from the Alabama Peanut Producers Association and the National Peanut Board.

Austin Hagan is a professor in the College of Agriculture’s Department of Entomology and Plant Pathology and a plant pathologist with the Alabama Cooperative Extension System.